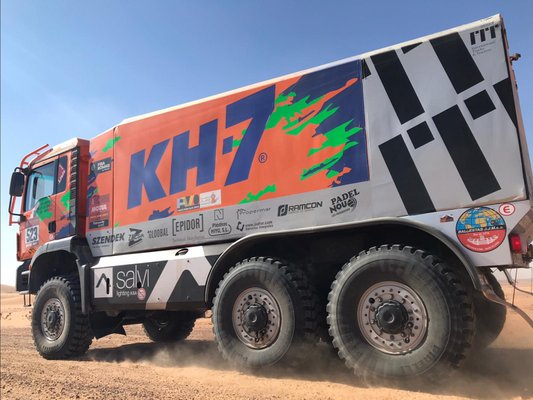 Champions 2020 in their ranking

Jordi and José Luis have already had the experience of the Dakar since they have been together for 25 Dakar and José Luis is the spaniard with the most participations behind him: this was his 30th Dakar and, like Jordi, he has competed on all three continents.

Always in a good mood, even joking, Criado said that this year's "was a round as a full moon", very happy to enter the Top 20 in the truck category, which is not easy with a heavy 6x6 when there are so many dunes and sand, wining also the 6x6 category, the 15th in his list, and production, the third.

"We are very satisfied, for both the truck and race. It was a very nice and fun test. We have competed well and helped everyone who needed it. With the few means we have, achieving waht we have done has a lot of merit", says Jordi Juvanteny, who has finished his 28th Dakar.

Without this clear vocation to help any stranded participant, this year they did not hesitate to retrace their steps so that a participant they helped could pass through the waypoint they had skipped, their ranking would have been certainly better.

The last day was no different in this respect. They found a South African participant lying at kilometer 85 "and we have towed him about 200 kilometers, to the camp. They were so grateful that they even ofered us money, which we naturally refused", says José Luis Criado.

It was a very special Dakar for the KH-7 Epsilon Team. "The first Dakar in Saudi Arabia has been very enriching, because of the reace and all the experiences it has given us, and because of the kindness of its people.

Moreover, for us it has been even more so because of the solidarity action of the "Truck of Dreams". "We carried it out with Fundació Vallès Oriental and the Saudi Children's Disabled Association ,during the rest day.

"The truth is, we are proud of how it all went down. It was very complicated to organize and get ahead in the middle of the race, and everything went very well", explains Criado proudly.

Tired but happy to have finished another Dakar, the KH-7 team is already counting the days until the 2021 edition. "Everything went very well, in terms of sport it was a Dakar 10, and we hope that everyone enjoyed our race as much as we did", says Xavier Domènech, implying that the orange MAN will come back for more.