Michael Horsch's conference in Cordoba, hand in hand with ITT 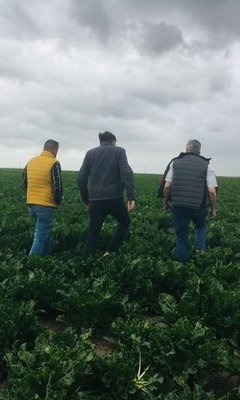 Five years ago ITT, a leading company in the sale and distribution of agricultural machinery in Spain and France, began distributing the Horsch brand in France from its company ITT Vimo. Horsch is a manufacturer of special machines and equipment for agriculture, recognized by farmers for its innovation and the quality of its materials. The success of this collaboration has led to a new project to import Horsch equipment in the Southern half of the Spanish territory.

On the occasion of the presentation of this agreement, on 25 April, ITT organized a day attended by more than a hundred farmers from the South. The session began with a presentation by Xavier Domènech Mir, CEO of ITT, who introduced the company and talked about the new ITT - Horsch collaboration project. The great attraction of the day was the presence of Michael Horsch, founder of the Horsch brand, who gave an interesting lecture, which, on the contrary to what might be imagined, was not about machines but an innovative vision of how it will be and where the agriculture of the future is heading.

Horsch. The family of farmers who conquered the agricultural machinery market

Before going further on the brand, it is necessary to talk about the person or persons who make up the Horsch family. This Bavarian family, something of which Mr Michael Horsch is proud, has carried agriculture in its blood, generation after generation. Parents, children, nephews...all of them have dedicated their lives to this work.

Horsch tells us the story of a family with an agriculture’s vision well ahead of its time, when back in the 70s, they decided to look for "minimum tillage" solutions for their large tracts of land. At that time the machinery needed did not exist, so Michael Horsch began to manufacture it. That first seeding machine, whose sole function was to serve the family, became a possible business formula.

This is how the family began to manufacture other machines, always looking at agricultural production as a whole. First, Horsch tells us, it is necessary to think about how to increase efficiency and, from there, develop the proper machinery in order to make it possible. However, to launch any company, he says, we need to have always a philosophy, a vision that moves it. "Having healthy soils" was the philosophy that moved Horsch family in those years.

Nowadays the Horsch brand is run by Michael Horsch, his wife and brother. They sell their equipment all over the world working mainly with large farms and modern-minded farmers.

Horsch's headquarters were built around the farm where they lived all their lives. 140 engineers work there, and all designs go through their hands and their heads first.

Currently, they have 6 production plants all over the world and a new generation ready to take over the family with the same impetus and illusion that once moved their predecessors.

The present dictates the future of agriculture

It is not the first time that someone tells us that in 2050 there will be 10 billion people in the world and the question they ask farmers is: Will there be enough production for everyone? According to Michael Horsch, in order to know the way forward in the future, it is necessary to understand what is happening now in our environment and listen to what the different media tell us every day. Phrases that are beginning to form the basis of the new lifestyle of today's society. The rejection justified or not, of genetically modified production, the elimination of glyphosate, the death of bees, animal welfare, organic farming, vegetarian or vegan tendencies. This together with several facts such as the control of nitrates in water, the concern about chemical/toxic residues in all food, health problems such as overweight, high blood pressure or sugar. These factors start to be very worrying…

All this defines a lifestyle that we cannot ignore and also forces us to change. However, Horsch tells us "we should not see it as something bad but as a business opportunity". If these facts worry today's society, we should also be worried about providing a solution. Supermarkets and department stores are already asking producers for change. It is key to turn the business around.

Michael Horsch reminds us that, 150 years ago, only 1% of the population could consume milk, meat and sugar on a daily basis. That's why the business was aimed at making these products cheaper so that they could be consumed by all of us. In the present, we have intolerances, hypertension, cholesterol, obesity... Today we have a longer life, but not a healthier one. We have a problem and we must react.

150 years later, it is time to change the business model into "promote a diet based on vegetables" and our life’s philosophy must be another.

So, let’s turn the past one, which was "to have healthy soils" into a new one that should be "helping people to be healthy" without abandoning this objective.

Spain, not far behind

For three days, Mr. Horsch had the opportunity to visit large farms of some ITT's large clients. Therefore, he could get to know first-hand some of the crops being grown in Andalusia: durum wheat, sunflower, beetroot, cotton, quinoa, olive groves and the new super intensive almond plantations.

Horsch was very impressed by the quality of the crops, the good work of the farmers in the area as well as the way they are incorporating the new crops "of the future" which are increasingly demanded by clients.

During his speech, Mr. Horsch commented with satisfaction the fact that many of our farms are already moving in the right direction, although he was also surprised by the age of certain machinery parks.

As Michael Horsch says, it is necessary to have a different image of agriculture and food. What will we eat in the future? Once we have the answer, we will ask ourselves the following question: How are we going to do it?

For example, Flexitarian diet is a growing trend all over the world. Flexitarians" base their diet on a vegetarian diet, but without giving up meat and fish completely, so they consume both, occasionally though, and look for a better quality. What will happen to animal’s feed agriculture if meat demand drops?

We have currently a billion hectares of cultivated land, of which 600 million are used for animal feed. These numbers will tend to be reversed and there will be even more hectares destined for Quinoa, whole wheat, legumes, etc. If the "Flexitarian movement" is the fastest grow within the world, farmers need to interpret these trends by producing new foods and diets based on vegetables. Large supermarkets also promote changes as far as food is concerned, for example, by offering organic products on special offer, so that people jump to this kind of food.

Organic farming is a new mentality, but what about fertilizers? We depend on animals to have the compost and fertilizers needed to carry out agriculture. Michael Horsch once offered us a novel concept: Hybrid agriculture. A mixture of both conventional and organic farming.

Today the Horsch brand is working on a new project "Grain with 0 chemical residues".

It is obvious that we still depend on fungicides and herbicides, but according to the aim, these are not present in the grain. How is that possible? It is not yet clear why the grain is sometimes free of these substances, so they are monitoring several hectares to find out what influences whether or not the chemicals are in the grain. Department stores are very interested in this project, therefore they are willing to buy these products free of residues, even if the cost is higher.

Finally, Horsch offers an interesting overview of the sector. According to him, the farmer has not much control over the price of the product, he can only act on the cost of production in order to achieve greater profitability, better yields or superior qualities, that consumers are willing to pay for. The detailed analysis of each cost in production, the use of more efficient machinery, innovation in agricultural processes, savings in each input, and some others, are key elements that the farmer should not neglect.

The complete conference, in English version, can be seen at the official ITT Youtube channel.