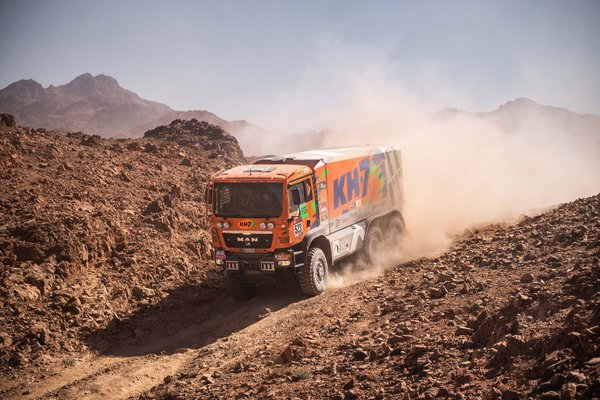 Jordi Juvanteny, José Luis Criado and Xavier Domènech completed the second day of the world's toughest race without a hitch.

"A delight". This was the unanimous exclamation of the members of the KH-7 Epsilon Team at the end of the second stage of the 2020 Dakar, between Al Wajh and Neom, which consisted of a very short link and a 367-kilometre special. Jordi Juvanteny, José Luis Criado and Xavier Domènech completed the course without any problems, in 26th position, after six hours of driving and navigation. In the overall standings, they gain one place and move up to 23rd, on the verge of the top 20.

The special started on tracks with many stones, which made the KH-7 fear that another very hard stage would follow after last Sunday's demanding start. However, the variety of the terrain has given way to other type of tracks, sand and dry riverbeds that the popular orange MAN 6x6 has dispatched without any problems. In this way, Juvanteny and his team mates even reached the goal when it was still light (at 5.30pm it was already dark in Saudi Arabia).

"Finally, it was a transitional stage, before the race was re-arranged, but the surroundings evoked the sensations of the classic Dakars in Africa. For us, it was a very "African stage", says Jordi Juvanteny, who is competing in his 28th Dakar, the 25th accompanied by José Luis Criado, born in Jaén with 30 Dakars behind him.

The day has brought two new developments fot the veteran Dakarans. On one hand, for the first time, the participants received the roadbook just 15 minutes before the start of the stage, which was supposed to make navigation difficult. "We've been doing very well with the navigation; Jordi and José Luis have been on top of it for a few years now, and it seems to have been done with them in mind as they discover the route as they go along. "We haven't had any slip-ups, just some doubts anout specific points", says Xavier Domènech, the third crew member of the orange 6x6, who is competing in his second Dakar with the KH-7 Epsilon Team.

The second novelty was that the participants of cars, trucks and SxS (light buggies) started mixed in the starting order, something that has been to the liking of the "Truck of dreams" and that has caused a small anecdote. "In the neutralization and mandatory stop of 15 minutes we agreed with Fernando Alonso, who apparently had some problem", explains Criado.

Satisfied with the good performance of the MAN 6x6, and with the balance of these first two stages, the KH-7 Epsilon Team faces this Tuesday the third day of the 2020 Dakar, a loop around Neom, with a special of 414 kilometers. For the second day in a row, Juvanteny, Criado and Domènech will receive their road book just before the start, and during the day they will crown the highest point of this Dakar, at 1,400 metres above sea level.

You can read the entire article here.